The Franckh-Kosmos Verlag-GmbH & Co. KG, or KOSMOS Verlag for short, is a media company in the heart of Stuttgart, which feels itself to be equally committed to the traditional and modern. Nature guides such as Welcher Vogel ist das? (Which bird is that?), Was blüht denn da? (What is that flower there?) or Welcher Stern ist das? (What star is that?) have been sold for well over 50 years and are continuously updated by KOSMOS.

Over the course of almost a hundred years of publishing history, numerous modern guides have also appeared, especially for bird watchers, star lovers, and animal and plant lovers.
KOSMOS science kits are also well-known and popular, bringing science and nature to young scientists. 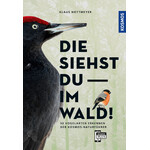 In 1822, Johann Friedrich Franckh founded the Franckhsche Verlagsbuchhandlung in Stuttgart. At first, the publishing programme concentrated on novelists such as Wilhelm Hauff, whose fairy tales such as Das kalte Herz (The cold heart) or Zwerg Nase (Little Longnose) and folk songs are still popular today.

With the rapid development of the natural sciences at the end of the 19th century, the publishing house changed its focus. Under the motto "understanding the natural sciences", the KOSMOS Handweiser für Naturfreunde (Guide for nature lovers) became the first guide- and non-fiction books on popular science topics.

In 1904, the then owner of the publishing house founded the Society of Nature Lovers and the magazine of the same name.

A short time later the company enjoyed its greatest publishing success: Das Sternbüchlein (The little book of stars) was published for the first time in 1910. This astronomical yearbook is still available today under the name Kosmos HimmelsJahr. This book is indispensable for amateur astronomers.

The first edition of the publishing house’s second great classic with the descriptive title Was blüht denn da? (What is that flower there?) appeared in 1935. You can still buy the current edition of this guide to the plant world, still with the same title, to this day.

Earlier still, in 1922, KOSMOS also offered science kits for children and young people. The Radiomann (Radio man) was particularly successful, and was still available until around 1960. Young people were able to technically understand the new mass medium of radio with this science kit.

This brief look at the publishing house's early history shows that the connection to "natural research for everyone" was inherent from the very beginning. Even though the publishing house today offers a much wider range of different media, its roots are clear to see. This is particularly evident in the serious way that this publishing house treats its great classics.